The need for offshore developers is increasing.

Software engineers are in great demand all around the world! With so much industry driven by technology, the worldwide developer deficit will reach 85 million by 2030.

Due to the worldwide need for digital expertise for online and app development, blockchain initiatives, and programming frameworks, the programming industry is predicted to rise. If you’re considering a career in software development, you probably won’t have any trouble obtaining work.

Inequalities in supply and demand are driving higher hourly prices for freelancers. As offshore organizations embrace employing offshore, hiring in your area, region, or nation is no longer the sole option.

Consider hiring IT professionals from Europe, Asia, or South America for your next software development project.

This business blog will look at the continents and the going offshore development rates in USD. Upwork. hourly fees may start as low as USD 30 and climb to USD 120 globally. How long is a piece of string, though? When calculating developer expenses, there are several aspects to consider. Please keep in mind that this business blog article simply provides an overview of common prices and is not intended to serve as comprehensive budgeting guidance for development projects.

Eastern Europe, which has over a million software engineers, has several centers, including Ukraine, Belarus, Poland, and Romania. Eastern European software engineers charge between $20 and $50 per hour. However, the number of hours to be done per week varies based on the programmer’s level, the tech stack needs, the project’s complexity, and sometimes, the number of hours to be worked per week.

Expertise in AI, mobile app development, data science, and Utility 3D programming languages. Gitlab, Earth.ai, People.ai, YouTeam, PetCube, Grammarly, Mobalytics, and MacPaw are just a few of the worldwide digital businesses that call it home. 70% of Ukrainians can communicate in English at an intermediate to advanced level. As a result, communication will not be a problem, and the IT Association reports that there is substantial IT education throughout the nation, with over 20,000 IT graduates each year.

Warsaw, Lodz, Krakow, and Wroclaw are Poland’s IT hubs, with typical developer rates ranging from $20 to $50. Poland is also the major IT hub in Central and Eastern Europe (Central Eastern Europe). According to Nearshore, a Polish IT development firm, Poland has around 280,000 software developers, which is nearly one-third of the 634,700 workers in all of Eastern Europe.

However, hiring a Polish developer to design your software is more costly than hiring one in Ukraine. Poland has political and economic stability, as well as good living standards.

Note: Of all the CEE nations, Poland has the smallest time difference from Western Europe, and it shares more of the same culture, including the ability to communicate in English.

Poland is placed third in the HackerRank average score, with 98. 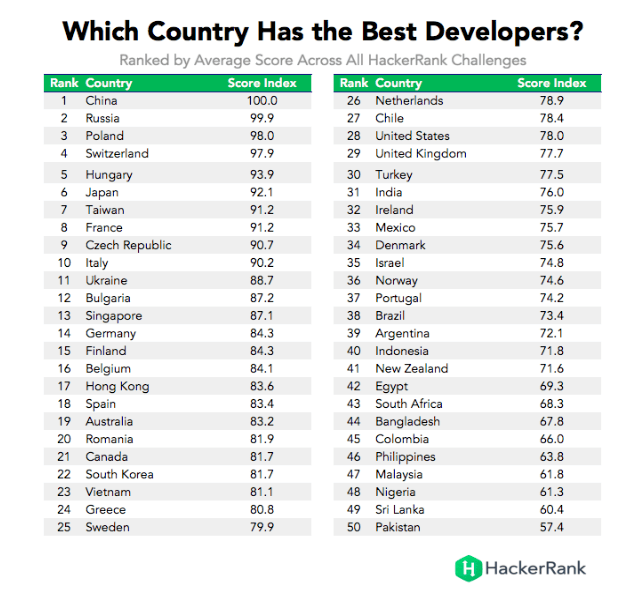 With over a thousand IT companies scattered over Belarus, and concentrated in its capital, Minsk, it is a top destination for businesses looking to outsource their software development and IT services. Belarus’s developer rate is between $20 and $40 per hour and it is influenced mainly by the country’s economic instability. However, the IT hubs in Gomel, Mogilev, Minsk, and Vitebsk represent good value with education and support for software developers.

Argentina’s IT Hub is its capital city Buenos Aires. Junior developers get $13 to $20 per hour, and senior software engineers net anywhere from $35 to $55 per hour. In addition, Argentina’s timezone is near Western Europe, and the country’s closeness to Western culture makes doing business with its offshore developers easy.

Tech business in Peru is increasing, and the growth is connected with the Government’s investment in the IT hub of Lima. Expanding its IT services, and with a solid relationship with the USA Peru generated $85 million from software development in 2019. Software developers can expect $35 – $55 per hour – a much higher rate than Argentina.

Software developer prices range from $30 to $50 per hour in Brazil’s IT centres of Rio de Janeiro, Curitiba, Porto Alegre, and Londrina.

Londrina is one of the world’s major IT outsourcing centers, both in Latin America and beyond. With a 15th-place ranking in the Tholons Services Globalization Index, half a million engineers and software developers, and more than 15,000 IT graduates per year, the nation has an endless supply of IT talent.

Bangalore, Chennai, Mumbai, and Kolkata are all IT centers in India. The hourly salary for developers is expected to be between $25 and $50.

A pool of junior and senior developers willing to work for less than the national average. The country’s offshore alternatives are reasonably priced, and the educational system emphasizes medicine and engineering. Furthermore, the inhabitants of the nation can converse in fluent English. However, working with Indian developers has its drawbacks: the lack of quality control and reliability. You’ll receive what you want from one of India’s greatest development teams if you do your homework.

Beijing, Shanghai, and Shenzhen are China’s IT centers. It is a nation with a large pool of skilled software engineers. With a population of 1.41 billion people and rising local demand for goods and software development services, China is the world’s most populous country.

In comparison to most American developers, Chinese developers are well-trained and inexpensive. Consequently, China remains a technological powerhouse, outperforming itself in terms of new ideas, startups, and worldwide corporations. Working with Chinese coders has just one disadvantage: the language barrier.

The Chinese place high importance on their culture and prefer to educate in their language; nevertheless, in recent years, the government has established country-wide institutions to improve English education to fulfill the growing need for Chinese technologists who speak English well.

The need for software engineers is now at an all-time high. Countries with low rates of software creation, such as Ukraine, have become important participants in the global market. Countries with low software development rates have similarly poor living standards and costs. Countries with high developer fees frequently have a high quality of life and high living expenses. We hope you found this information helpful in your search for your next developer.

Caveat Emptor – the information in this article was valid at the time of publishing.

No Result
View All Result

No Result
View All Result

© 2021 businesshelpandadvice.com - We are the premier website for business engaging content, focused on helping business owners and decision-makers launch, build, and expand their businesses.

This website uses cookies to improve your experience while you navigate through the website. Out of these, the cookies that are categorized as necessary are stored on your browser as they are essential for the working of basic functionalities of the website. We also use third-party cookies that help us analyze and understand how you use this website. These cookies will be stored in your browser only with your consent. You also have the option to opt-out of these cookies. But opting out of some of these cookies may affect your browsing experience.
Necessary Always Enabled
Necessary cookies are absolutely essential for the website to function properly. These cookies ensure basic functionalities and security features of the website, anonymously.
Functional
Functional cookies help to perform certain functionalities like sharing the content of the website on social media platforms, collect feedbacks, and other third-party features.
Performance
Performance cookies are used to understand and analyze the key performance indexes of the website which helps in delivering a better user experience for the visitors.
Analytics
Analytical cookies are used to understand how visitors interact with the website. These cookies help provide information on metrics the number of visitors, bounce rate, traffic source, etc.
Advertisement
Advertisement cookies are used to provide visitors with relevant ads and marketing campaigns. These cookies track visitors across websites and collect information to provide customized ads.
Others
Other uncategorized cookies are those that are being analyzed and have not been classified into a category as yet.
SAVE & ACCEPT